Most images of the Black-capped Kingfisher (Halcyon pileata) show the bird perching (above left). In this posture the prominent white patch on each wing is not visible. In flight, especially when seen from above, these patches are conspicuous, formed by the white bases of the primaries feathers. Allan Teo a.k.a. eagleeye is sharing with us his image of the kingfisher in flight where the prominent white patches on the wings are clearly shown (above right).

With the wings outstretched, the jet-black head, white collar and throat that extend to the centre of the breast, and orange-rufus belly, flanks and lower wing-coverts are all very prominent.

At the same time the large red bill and short dark red legs and feet are also obvious.

The plumage colouration seen in flight from above is shown in an earlier post. The wings appear black and blue and the white patches are also conspicuous. 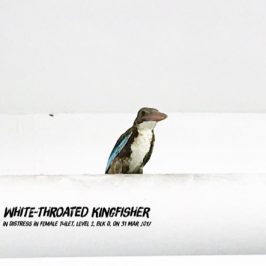