“To my knowledge, Sungei Balang is about the southernmost paddy field area in Peninsula Malaysia, in the state of Johore. The place is called Parit Yusof, and is about 20 minutes out of the town Batu Pahat.

“Paddy fields are great birding areas, except that there are hardly any shelter from the hot morning or afternoon sun. In the mornings, when the sun is not shining down on us, we would be walking on the bunds of the fields looking for snipes, different types of munias, Yellow Breasted Buntings, all of which are quite rare in such an area. Chinese Pond Herons are quite abundant, as these are their favorite habitat. Red-wattled Lapwings are also plenty, as like Rails, Wood Sandpipers, and the Common Sandpipers that seem to like these wet and muddy areas.

“Oriental Pratincoles, which are winter visitors and passage migrants, can be found in the correct season.

“The list of birds that can be found in the paddy fields seems endless. Birds like the Lesser Adjutant Storks that float in the thermals like harbingers of death close over head, or they can be found huddled together under a small bush in a conference of old men, arguing over inconsequential matters. “Raptors in the area seems to be well tolerated by other birds, I am quite sure they know their fate if they are not alert to the dangers posed by these predators. Raptors like the Greater Spotted Eagle would patrol the skies, with others like Black Kites (below left), Eastern Marsh Harriers (above left) and Brahminy Kites, looking down onto the paddy fields for possible prey. Black-winged Kites hover from some height before plunging down, but not all such actions result in success. From my observations, the majority of prey these birds succeed in catching are field mice, followed by birds like the chicks of White Breasted Waterhen, and others. “However, if one of the raptors manages to catch a prey, the others would attempt to steal it from him and then one would be able to see some spectacular avian aerial battles conducted in front of your eyes. Most of these are conducted just above the rice plants or harvested paddy fields. Actually, the harvested parts of the paddy fields provides the raptors greater opportunities to get their prey, as the latter are now more exposed than before. “However, I find the dive bombing of Japanese Sparrowhawk (top right) most spectacular. From a great height, these birds would dive with great speed towards their intended prey, the result of which would be an explosion of munias from the rice plants, and having missed getting the prey, the sparrowhawk would then weave among the scattered munias for another attempt to grab something.

“The one thing that I like about this place is that the farmers here seem very bird friendly, encouraging the natural check and balance, using raptors and owls (Barn Owl, left) to control pests like field mice. Nest boxes (above right) are erected around the fields to encourage the propagation of predator birds, stakes are planted all around the fields to encourage raptors to perch on them, to provide them a high position to survey the fields for vermins.

“Malaysia has many paddy fields, and places like these can be very productive birding areas.” 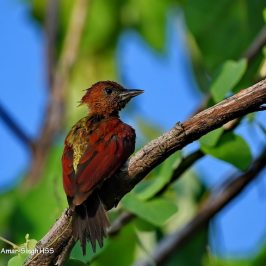 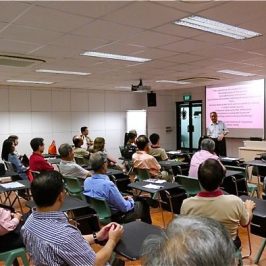 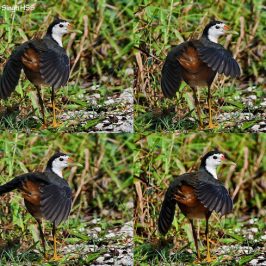 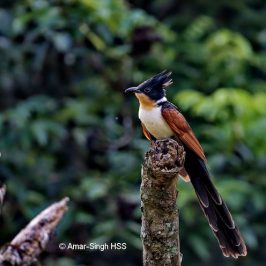 For large birds the Chestnut-winged Cuckoo (Clamator coromandus) is not easy to spot. This one...