Allan Teo was in India recently and returned with images of Hoopoe (Upupa epops) behaviour. Hoopoes are seen in open areas, including woodlands, cultivated areas and gardens. There is only a single species but nine subspecies, seen in Africa, Madagascar, Asia to parts of Southeast Asia. It has been recorded in Malaysia as a vagrant.

The bird feeds on large insects and their larvae and pupae found in the soft ground. Small vertebrates like lizards, snakes, frogs and geckos are also taken. The bird forages alone or in pairs, mostly on the ground, digging and probing with its prominently long bill (above). It also turns over the ground debris seeking prey.

The appearance of a starling triggered the Hoopoe to spread its wings, displaying its strongly patterned, black and white plumage to its full glory, appearing larger than it actually is (left). This was enough to warn the approaching starling off. 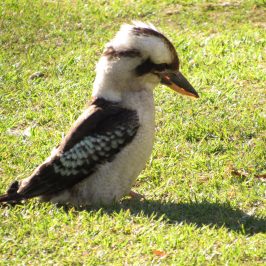