The Hooded Pitta (Pitta sordida), an uncommon winter visitor and passage migrant to Singapore, has been seen by many around the end of November to December 2008. The areas around Jurong, at the Chinese and Japanese Gardens, are a favourite spot.

The pitta has also been spotted at Bidadari, a lightly wooded area that was, until recently, a cemetery.

And on 17th December, Johnny Wee also succeeded in photographing a Hooded Pitta, but standing on one leg (below left). Now why did the pitta stand on one leg? To conserve heat, of course. The un-feathered leg areas, unlike the rest of the bird that is covered with feathers, tend lose heat faster. So in an effort to conserve heat, the bird lifted one of its legs so that it was covered by its body feathers – you don’t expect the bird to lift up both its legs at the same time, do you? At Bidadari, there were at least two Hooded Pittas, as noted by G Sreedharan on 15th December: “…you will probably be aware of the Hooded Pitta sighting at Bidadari from two week-ends ago. Well I have an interesting addition of information from there… Last Saturday (13 Dec) I actually sighted two Hooded Pittas at that location. KC Tsang who was also near me sighted both birds as well. A few more bird photographers were there with us but were concentrating on the first pitta and thus they did not observe the other pitta.

“Philip Tang’s wife, who was standing beside me when I took the attached photo (above right) has a very nice and short video of the pitta grabbing and eating what looks like a roach that crawled up its body.

Pitta standing on one leg by Johnny Wee; other by G Sreedharn. 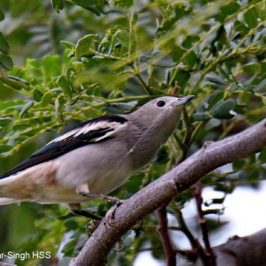