In May 2008 Willis documented the difficulties Black-naped Terns (Sterna sumatrana) face when bringing food to feed their chicks. These terns have no hesitation robbing another of its fish, either in flight or on land when the fish is passed on to the chicks. The drama began when an adult, with a fish in its bill, arrived to feed its chick (top row, left). The moment a chick received the fish, an intruder arrived to snatch it away (top row, right). Naturally the adult turned on the intruder and chased it away.

However, the moment the adult flew off to chase away the intruder, another intruder saw its opportunity and flew in (bottom row, left). It tried hard to grab the fish from the chick (bottom row, right). The chick had the advantage as it had half-swallowed the fish, leaving the tail end sticking out of its bill (bottom left). This made it difficult for the second intruder to pull out the fish. In the end the chick won the struggle and enjoyed the meal (above right). 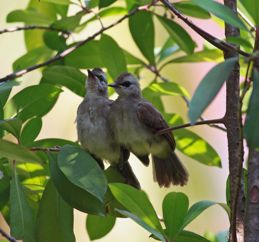 The Yellow-vented Bulbul (Pycnonotus goiavier) is such a common birds that birdwatchers simply do not...