The Asian Koel (Eudynamys scolopacea) is a cuckoo, and like many cuckoos, it is a brood parasite. The female koel lays her eggs in the nest of one or more species of hosts, allowing the latter to incubate her eggs and feed her chicks until they are fledged and for some time after. In Singapore it has always been assumed that the Asian Koel’s host is the House Crow (Corvus splendens). Evidence that this was so only came in the mid-2000s (Wee, 2005).

The drama started in October 2003 when a pair of House Crows nested in one of my two ceram palm (Rhopaloblaste ceramica) growing in my garden. The outcome of this nesting was an Asian Koel.

Three months later, there was another nesting and again, a keol fledged from the nest. A third nesting was detected, again three months from the second. And yet again, no crows fledged. This time three koels fledged, the second a week after the first and the third, three days after the second.

I expected another nesting in July 2004, three months after the last nesting. Unfortunately the nest was ripped apart and the debris landed on my driveway. What caused this destruction was not known.

One month after this, an egg was found smashed on my driveway. Apparently a new nest had been rebuilt in the crown of the palm. On September 2004, two other eggs were found smashed below the palm.

After this incident, the crows did not return to nest.

Then I came across the book by Payne (2005) where it cites Baker (1934): “The Koel may remove a host egg.” Apparently the koel’s shorter incubation of 13-14 days compared to the crow’s 16-20 days allows the former to hatch first and thus eject the eggs or nestling of the host. On the other hand there have also been cases of the koel nestling growing up together with those of the host. Payne (2005) also reports that two or more cuckoos sometimes fledge from a nest.

So it is very possible that the eggs that landed on my driveway in July 2004 could be the egg of the crow, pushed out by the koel chick.

However, a number of questions remain unanswered. Which bird was responsible for ripping up the nest in July 2004? What happened to the koel chick if, indeed, it did eject the crow egg in August 2004? Could the two eggs that were ejected in September 2004 belong to the crow? Did the crows abandon the nest after this, leaving the koel chick to its fate?

Unfortunately, birders in Singapore have never been interested in such observations and the few ornithologists around have other research priorities. However, a new breed of bird photographers is actively documenting bird behaviour that one day may provide answers. Tang Hung Bun is one of them. In December 2005 he documented the contents of a crow’s nest that had a naked chick and an egg (top left). The next day when he checked the nest, he found only the egg, the chick was gone. Two weeks later, he checked and to his surprise found three eggs (top right).

Unfortunately, before he could complete his observations, the local Town Council people destroyed the nest. Part of our crow eradication programme.

Could the naked chick be a crow? Could it be subsequently removed by a koel? Did the koel return to lay one or more eggs? More questions to be answered!

Forest Ang was in Butterworth Town, Penang, Malaysia recently and sent in this account: “Took... 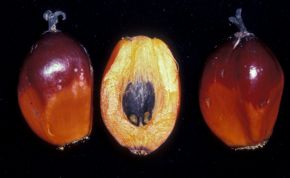