Lee Tiah Khee was with KC one dark night in October 2008 when they heard the distinct call of an owl around a tree. Sensing that something was amiss, they located an adult Collared Scops Owl (Otus bakkamoena) arriving on a branch with a lizard clamped in its bill. The lizard was headless, apparently a result of an earlier struggle.

Suddenly the hungry fledgling appeared on a nearby branch, having heard the adult arriving. Immediately the adult passed the dead lizard to the fledgling and flew off to keep watch nearby. Clasping the prey firmly in its talons, the fledgling began to feed on the lizard.

Images by Lee Tiah Khee were captured with a 600 mm lens. 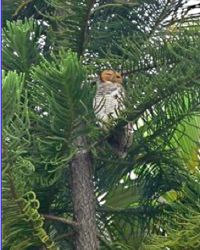