They seemed to uncannily know the best time for their nesting – two days prior to another of my birding trip. They came to finish some incomplete business (below left)

Perhaps, they were tipped off by their experienced ally – Yellow-vented Bulbul (Pycnonotus goiavier) and family by lending the use of their old ‘mansions’ for a safer haven in my sheltered balcony- where choices of nesting sites abound. On 20th October, a white egg shell was seen cast aside of a make over, old hanging nesting site. They have chosen a bird nest’s fern (Asplenium nidus) grown into a coconut husked shell camouflaged by parasitic Squirrel’s foot fern (Davallia trichomanoides). The decorative contraption was suspended from a wooden beam of the balcony pergola (above right).

I left Silva to carry on nurturing her young with least interruption by making minimal use of the balcony. The nest was just beside the bedroom doorway, about seven feet above ground. Silva was house cleaning too and left chick poo and debris scattered on the floor (above middle).

Discerning amateur gardeners will attest to the challenge of being able to successfully grow these wild ferns in designer home gardens unless one is born a natural and with ‘green fingers.’ The Squirrel’s foot fern is best and commonly seen growing wild epiphetically and sprouting from trunks of oil palm trees in tropical Malaysia. We can now fast forward for descriptions on how Silva nurtured her hatchings have already been made.

We shall name the chicks- Dicky2 and Little Jo2.

8.44am- A pre-fledging parental role was played out by a cooing Stripy for the ‘All clear.’ sign (above right).

9.12am- Silva returned with last ‘breakfast in-bed’ feed. Following a quick feed, she flew and perched on the same Christmas tree as described earlier and began to encourage chicks to join her by cooing.

9.16am- Dicky2 took his first test flight and landed on top of a decorative bird cage, five feet away (below left).

Feeling unsure, he flew and wobbled onto an Asplenium foliage. He flew back into nest. 9.24am -I sat and observed the fledgling process quietly. Dicky2 then took a bold flight towards me and landed on the balcony railing, three feet away (above middle).

Dicky2 responded to the directional call of his parents by flight (above right).

When he eventually did, he flew onto a mango fruit tree branch, lost his direction to the staging tree and headed across the road- 50 feet away, onto an angled branch of a huge angsana tree instead!

The nest vacated and successful fledgling confirmed (below left). It took another hour later, after all the cooing and coaxing from Stripy and Silva that eventually, the family of four were united and close to home-their first home… the nest, on top of the bird nest’s fern (Asplenium naidus)where it all began (above right).

This six part series have turned out eventful, took longer than expected, have great potential for a sequential closing but I have to bring them to a closure now.

A sneak preview of 6 day old healthy Dicky2 and Little Jo2 (below).

Several lessons have been taught to their parents.

In turn perhaps, the dove pair does seemed to have a whispering and motivational message for our ever complicated fabricated society. “Lose not hope, but exercise resilience and turn adversity to opportunities”.

To ponder too- should bird observers encounter another similar situation, how best to deal with or not to activate a rescue plan for chicks but rather, to let nature takes its own natural order of things.

Regardless, that I am but a simple home owner and with full access to my domain, my observations and photography were all carried out naturally, embracing appropriate code of birding practice and done with no destruction of any plant material nor habitat and in any way compromised bird nesting activities.

This nesting saga serves to create human awareness that our shared and shrinking environment is indeed a hostile world for birds to breed with ease.

If observing scientifically and to save guard their species is a human responsibility, then it is an honourable choice for every human being and is and must be a contributing part of the deal in the – SURVIVAL OF ALL SPECIES.

This final issue brings to close my 48th article contributed to BESG and to wrap up 2008.

I look forward to another prosperous and successful year, writing another theme and perhaps bring forth to share another level of understanding the avian world. Until then.…..

My sincere thanks to YC Wee for his dedication to BESG and in providing me exclusivity of space category, to continue the joy of writing and readers enjoying me as your

Wishing all Readers
“Happy Holidays and a Good, Healthy and Peaceful New Year 2009”. 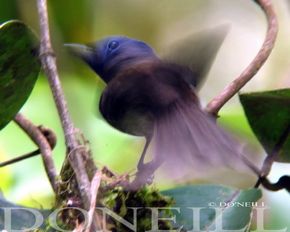 “Dusting out my bird gallery like a wine cellar, I picked a suitable subject to...