What happened to the dragon fly?

It took three full minutes for the female Mountain Bulbul (Hypsipetes mcclellandii) to realise there wasn’t any chick going to take her feed off her beak. She finally decided what she had to do with the winged insect. It became her snack (below). A two wheeler scooted round the bend and sent the parent bird to sprint and the latter made a dive for the undercover bush on the slope.

What issued were excitable calls of frantic conversations between two birds reporting the death of their chick. It soon dawn on me that the male partner was in the bush all along. Never a moment did he showed his presence while his partner was whining away and calling. I wondered why……

I chanced an acquaintance with an English bird-photographer from Singapore. We decided to be civilised about our differing methods of bird photography and explored the area further.

Chris’ SLR with bazooka len was excellent for short distance shots vs my slower, humble long distance digiscope. The worse scenario combination of both would be, an uncaring SLR photographer insisting to keep camera on flash mode and standing in front, sending a rear digiscope into ‘sleep mode’, drugged by flash photography of a startled bird that flew and digiscopist, probably having tumbled into a ravine in dismay!

An hour later somehow, we were magnetically drawn back to Hemmant Trail only to note a four minute observation. The female Mountain Bulbul was still around and this time she had a different catch-.perhaps a damsel or another insect fly species in her beak (below left). The female parent simply walked passed the dead chick and kept chirping and looking away in a different direction, waiting and searching for a life chick that never came (above right). What came instead was a vehicle that whooshed passed, sending her to duck quickly onto a curb stone slab, keeping the catch in beak (right).

The lucky female made a few more ‘cheep, cheep’ followed by a few hopping mad stunt on the stone slab.

Phew! That was a close shave.

Finally, the male came out of hiding probably in disgust. Having not accepting anymore of it, gave a few whistling calls and led the female off. They soon disappeared beyond the bend. So was a loss of one breeding season of reproduction.

Why did the female parent continued to bring food? Is a bird capable of hope and perseverance? Or exhibiting the behaviour of self-denial or just…couldn’t let go?

Do males play pragmatic roles, only intervening when necessary?

The next two images show the gruesome results of more vehicles that drove passed during our absence.

The image below (left) appeared to show the chick further flattened as compared to images of Part one as featured. More ‘brain drain’ and entrails were purged as marked in orange to add to the initial brain tissue- scalp, marked yellow in the images above (right).

The bonus joy of sighting a red looking bird by Chris was short lived as it flew in to wrap up our birding visit for the evening at Hemmant Trail. While trying hard to locate the bird for a best view shot, a visitor walked towards the T- junction started hollering on top of his voice. A quick, weak and blurry shot was delivered. The disturbance sent the male Red- headed Trogon Hapactes erythrocepthalus to flee- a quality bird that birders do come along way hopeful to meet (left)

‘What are you loooo…king at?’ shouted the loud voice in a cheerful mood.

The walker received a free lesson from me alright. It was never a pleasant task to educate an inquisitive, educated adult lacking in awareness about observing in silence.

Pleee…se do not engage in distractive conversation with bird-digiscopists and photographers alike while they remained in concentrated focus and indulgence in an avian world of their own. Thank you. 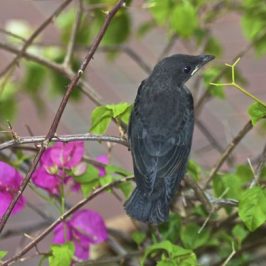 It was a hot and dry evening and I was watering the plants along a...