KC Tsang had a busy week in November 2008 with the arrivals of the Black Bazas (Aviceda leuphotes) in Singapore. He first photographed this raptor on 4th November at Neo Tiew Lane where he sighted three birds. The next morning he encountered more birds at Bidadari cemetery. And on the 9th, he counted at least six birds at the same cemetery. He thinks that there are at least a dozen birds around.

The Black Baza is a common winter visitor and passage migrant. Formerly scarce, the bird is now becoming quite common. It arrives as early as 20th September and as late as 8th April. All three images of the Black Baza by KC Tsang. 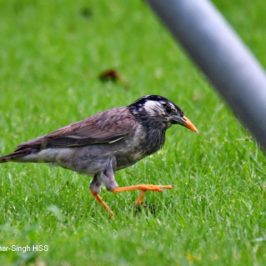