The umbrella tree (Schefflera actinophylla) is native of New Guinea and Australia. It attracts the Banded Woodpecker (Picus miniaceus) that comes for the ants that live at the base of leaf stipules (1, 2). The tree in my garden has since flowered and the flowers are attracting birds. A pair of Javan Mynas (Acridotheres javanicus) (above left) regular visits the flowers. They come mainly in the evenings to feast on the honey secreted by the flowers. They are very protective and will chase away other birds.

Once in a while a stray Yellow-vented Bulbul (Pycnonotus goiavier) will come but only when the mynas are not around. Smaller birds like the Brown-throated Sunbird (Anthreptes malacensis) (above left) also visits. A male regularly comes but I have yet to see the female. A pair of Oriental White-eyes (Zosterops palpebrosus) (above right) are always lurking around. These smaller birds can only feed when the mynas are not around. So they need to feed fast. I did see a male Crimson Sunbird (Aethopyga siparaja), but only briefly.

Once in a while the Black-naped Oriole (Oriolus chinensis) appears (top right). It normally takes its time around the flowers. It perches a distance away, looks around and eventually feeds on the nectar. And unlike the mynas that feed openly, the oriole feeds behind the shelter of leaves and branches.

A few times I saw an oriole being chased away by the mynas. Once, a myna arrived when a pair of orioles was feeding. One oriole flew off while the other stayed. Then another myna arrived and attacked the stubborn oriole. Only then did the oriole move away.

The Scarlet-backed Flowerpecker (Dicaeum cruentatum ) is sometimes around, darting about but I have yet to see it feeding on the flowers. Maybe the presence of the mynas is too intimidating.

So far, only six species of birds have been seen feeding on the nectar. This is understandable as this is an urban garden. I am sure more birds will be seen if the tree is in a rural setting. 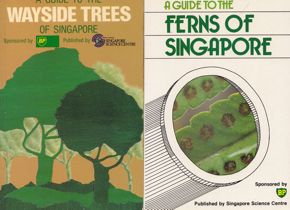 This posts provides lists of books that can be used to help identify the commoner...