On 2nd November 2008, KC Tsang photographed two species of terns when out in the field:

“I seem to have two different terns here, the angle and slope of the  foreheads, the thickness of bills, seemed different. I believe both are juveniles.”

KC identified them as White-winged Tern (Chlidonias leucopterus) (left top) and Whiskered Tern (Chlidonias hybridus) (left right). However, he was a little apprehensive and got confirmation from our field ornithologist Wang Luan Keng and wader expert David Bakewell who is based in Penang, Malaysia. Both agreed with the ID and the latter e-mailed KC.

“Please don’t underestimate your powers of identification – I think you have it spot on in both cases! Structurally White-winged look ‘skinnier’ than the slightly beefy Whiskered. The ‘headphones’ head pattern of White-winged is quite well known, but less so the slight ear covert smudge of juvenile Whiskered, which may throw some people off.

“The bill is another good feature – discernibly thicker and more powerful on Whiskered. When juvenile feathers are still present, identification is made easier, as those buffy-based, black-fringed scapulars and tertials are diagnostic of Whiskered.

“Notice that the juv tertials of White-winged are not nearly so contrasty, shading to dark toward the tips. Finally, I find the silvery outer webs of the primaries of Whiskered a good feature, compared with the blackish primaries of White-winged. Whiskered is supposed to be longer-legged than White-winged, but I’ve never found that to be of much help in the field, and it isn’t obvious here either. Hope that helps.”

White-winged Tern is a common winter visitor to Singapore while Whiskered Tern is a rare visitor. Both are also passage migrants. A number of other photographers have also documented the Whiskered Turn arriving in Singapore. BK Lim showcased his images in the photographic forum, Nature Pixels, taken in October 2008 and shown above.

According to Luan Keng, the population of Whiskered has somewhat plummeted over the last 10 years, seen mostly from September-November. White-winged on the other hand are more often seen from January-March. 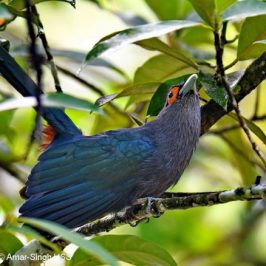 “The friendliest of malkohas: Chestnut-bellied Malkoha (Phaenicophaeus sumatranus) (above, below). “It likes to adopt an...