Ng Kiah Hwa a.k.a. hawkeyes documented a Collared Kingfisher (Todiramphus chloris) catching a crab and expertly handling it to eventually swallowing the crustacean. The images were taken in Penang, Malaysia on an October 2008 evening. The Collared Kingfisher often forages around mud flats, catching mainly small crabs and other crustaceans. Sometimes it catches a fish or two or even a mudskipper. Inland, it catches insects, tadpoles, frogs and lizards.

With small crabs, the bird either bashes it to death or kills it with its powerful grip of the mandibles. It then swallows it whole, casting a pellet of the shell some time after. However, when feeding crabs to its chicks, the shell is smashed first. 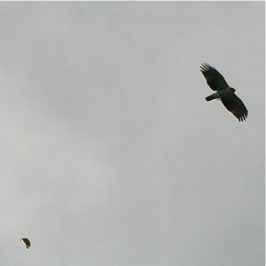