The posting of a Chinese Egret (Egretta eulophotes) sighted at the Sungei Buloh Wetland Reserve sparked a minor controversy on its identification.

Morten Strange had a look at the images and wrote: “This is always a tough one. Mendis could be right. But I would say with this one that there is a 90% chance that this is a Pacific Reef Egret (Egretta sacra). I say this on the shape of the bill and the short legs showing well at take-off (both thigh and tarsus bone). It seems to me that Chinese should have longer legs; and a more narrow bill, coming evenly to a point, it is also more significantly bigger than Little (the other bird with the black bill and legs).

“There are people in the OBC that are more qualified than me on this, I could be wrong … or you can check orientalbirdimages.org for more images, the field guides mainly show the breeding plumages which are very distinct!”

Our bird specialist R Subaraj sent in this comment: “I am not convinced that it is a Chinese Egret as the photo shows the egret to have too much yellow on the lower mandible, the neck being somewhat too short, the thighs being too short too and the bird being somewhat small compared to the Little Egret in the photo.

“This may be due to the angle of the shot but then again, this may simply be a white-phased Pacific Reef Egret (also has green legs and the features I mention above).” Subaraj was sent another image (above) and he was still not convinced, listing the following:

“a) This photo shows the birds to be similar in size (Chinese should be obviously larger than Little).
“b) The bill of this “Chinese” appears shorter and stouter (Not long and dagger-like).
“c) The lower mandible is mostly yellow with a dark tip (Which indicates Reef as Chinese is only yellow on the basal half).
“d) The thigh look noticeable shorter than shank (Only slightly so in Chinese).
“e) The neck does not appear longer and more graceful than the Little.”

Mark Andrews a.k.a. Rockfowl, a UK nature tour leader, on the other hand has this to say to Subaraj’s points:

“a) Size difference: There’s only 3cm difference between Chinese and a large Little, I’ve watched them feeding together and it’s not apparent – http://orientalbirdimages.org/birdim…116&pagesize=1
“b) Bill size and shape: I think this is rather subjective? Go through above link.
“c) Lower mandible colour: Mmm – http://orientalbirdimages.org/birdim…116&pagesize=1
“d) Thigh size: Can be variable on conditions though agree yours looks short in the second image.
“e) Neck length: Again, look through the OBC images, they’re very similar!

“Having said that, have you noticed the slight kink on the lores in front of the eye, this is a pro Chinese feature. Compare with Pacific.

R. Subaraj has the last word: “I must point out that birders here have been observing winter-plumaged Chinese Egrets in the field for over 20 years. Before our habitats were altered, there was a regular winter flock of up to 15 birds at Serangoon and we have regularly observed these birds in the company of white-phased Pacific Reef Egrets.

“In Singapore, we have as many, if not more, white phased Reef Egrets as there are dark-phased Reef Egrets. We spent hours in the field observing both species to determine their differences. Even today, while many good habitats have been lost, we still see a few Chinese Egrets in the field, each winter. Many have stayed on, over the years, until they change to summer plumage, which further confirms our winter identifications.

“While images never show all the views that you get seeing the species in the wild, I am confident in my views about separating the two species. Do bear in mind that the egret in question is in the company of a Little Egret and some of the comments are based on this comparison.

“The points that I made about bill size and shape (has also been written by other observers here and elsewhere as a feature), lower mandible colour (good feature that can regularly be determined in the field) and thigh size are valid, in my opinion, based on field experience and not images posted somewhere.”

Obviously it is easier to ID the Chinese Egret when it is in breeding plumage. In non-breeding plumage, there is difficulties in differentiating it from the Pacific Reef Egret. According to Wells (1999), “one useful difference from white Reef Egret being proportionate leg and foot length against folded-wings…” 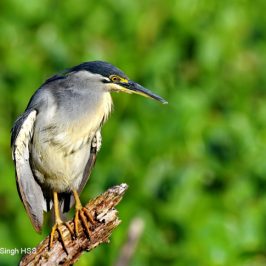