On 19th October 2008, KC Tsang and wife Amy was at Teruk Track near Kranji when they spotted a Peregrine Falcon (Falco peregrinus). “Amy and me spotted a pair at Terut Track this morning at around 11.00 am,  high up the BBC’s radio pylons, one on each pylon (above). They had reveled themselves by their load calls … kek… kek…kek… if not it would had been next to impossible to spot them…”

“Besides the peregrine falcons, there was a pair of White-bellied Sea Eagles (Haliaeetus leucogaster) (below left) and one  Black-shouldered Kite (Elanus caeruleus) (below right)…” This is a wild area with the Kranji reservoir nearby. The plentiful fish in the reservoir must have attracted the sea eagles and kite. And the falcons? They must have been eying the many terns that fish around the reservoir.

The falcon, an uncommon winter visitor and passage migrant, was easily identified, but not to the subspecies level. It took a Malaysian birder, Mike Chong, to identify the subspecies as japonensis, after which a local birder was confident enough to agree.

KC did it again. Three raptor species in one morning! 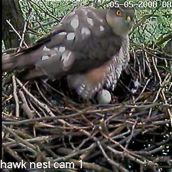 Dave Culley runs the Sparrowhawk Island website that captures many species of British birds in...