From India comes a note from Ashwini Vaidya, on the preference of the Indian Silverbill (Lonchura malabarica) for old weaver nests.

“I have been following BESG for a while and find it really interesting. Sending my picture of Indian Silverbills occupying a Baya Weaver’s nest. They were abandoned, half completed nests and this is the second time I have seen Silverbills occupying nests made by weavers. The picture was taken in Hyderabad, India.“ Earlier in January 2007, Ashwini wrote “I was at Manjira WLS, Sangareddy on Sunday. We observed a curious thing there: a silverbill with a feather in its beak was perched on a tree that had several weaver bird nests. It was followed by a female(?) silverbill and both of them surveyed us standing close by. Then the bird with the feather fluttered into the weaver bird nest – it was one of those ‘two-storey’ nests and stayed there for a while. The other bird remained outside and kept uttering low chirp sounds. Then the first flew out, minus the feather. Looks like the silverbills were trying to use the weaver bird’s nest for themselves!”

Indian Silverbill is a small to medium-sized munia of the open country, scrub, cultivated areas and any areas associated with human dwellings. It is found throughout the Indian subcontinent and west to the Middle East.

Its nest is a somewhat irregular to ovoid sphere made of grass with an entrance at one end. It is built in bushes and trees up to 3 m above ground. According to Restall (1996) the Indian Silverbell also favours old weaver nests, like those of Baya Weaver (Ploceus philippinus) and Streaked Weaver (Ploceus manyar). 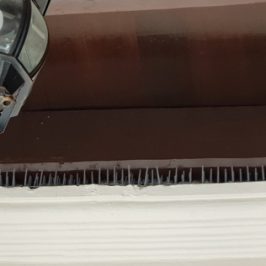 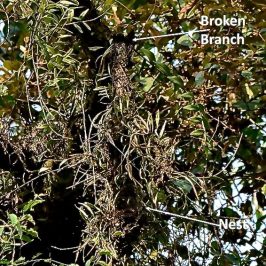