In early August 2008, Lee Tiah Khee witnessed something most birders fail to notice. He was monitoring a pair of Brown-capped Woodpecker (Dendrocopos moluccensis), also known as Sunda Pygmy Woodpecker, when he saw the chick fell out of the nesting cavity (left top).

It was around noon when this unfortunate incident happened. One of the adult responded but there was nothing it could do. The chick tried flying but ended on the ground below the nest (left bottom). The adults were vocalising loudly, possibly encouraging the chick on.

The chick tried hard to climb back to the nest cavity, clawing up the nearby wall. Later it found its way up a tree, managing to climb half way up, calling for its parents all the time (below).

Tiah Khee returned to the site that evening and found the chick clinging to a tree trunk by the nesting tree. An adult flew past it and went to the nest opening to feed the other chick.

Birdlings regularly fall out of their nests. Sometimes they are pushed out by their older siblings. Other times they may try to fledge before they are ready and land on the ground. Usually they can look after themselves, flying short distances before becoming more proficient in flight. People should refrain from picking fallen chicks and bringing them home. If necessary, pick them up and place them somewhere above the ground, away from stray cats, etc. The adults will invariably return to feed and care for them. 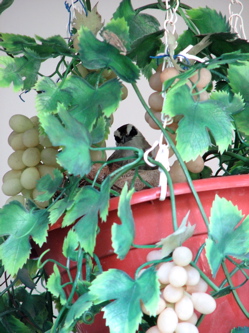