Meibao was walking to the bus stop opposite the National University of Singapore Bukit Timah campus after a walk at the Botanic Gardens at about 4pm on 29th August 2008 when he saw a duck in the canal. “ I think it’s a female mandarin duck. The guide book did not list Singapore as a country I can expect to see it, so could it be an escapee from Jurong Bird park? It was standing by the water, but I did not see it attempt to find food. At one point, the duck stood on one leg and used the other leg to lift its tail feathers slightly. Was it trying to poop and tried to keep it’s tail feathers clean by lifting them out of the way? I was too far away to see if it pooped.”

Our bird specialist R Subaraj has this to say: “Years ago, at least two pairs of Mandarin Duck were released into the Botanic Gardens. On August 27th 2008, I noticed that there were a few Wandering Whistling-Duck at the Symphony Lake (along with the Lessers).

“Seems like someone has been releasing non-native ducks again and it is possible that the Mandarin at the drain is one such bird. The Mandarin is a mere escapee and not native or an established feral species in Singapore.” 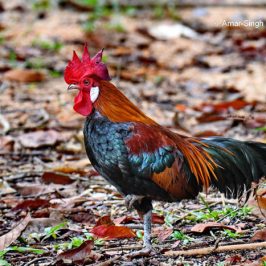 “This glorious adult male Red Junglefowl (Gallus gallus spadiceus) stepped out of the underbrush onto...