Adrian Lim managed to few shots of the Mountain Fulvetta (Alcippe peracensis) having breakfast early one morning in May 2008. The insect it managed to capture appears to be a beetle. The bird behaves a little like a shrike in the way that it eats its prey, using its ‘claw’ to hold it. This shy montane forest babbler is a resident of Peninsular Malaysia. Like most babblers, they move in the lower levels of the forest and it is generally difficult to photograph them.

As with the Blue-winged Minla (Minla cyanouroptera), its food is poorly recorded except small berries and small caterpillars that were observed being fed to nestlings (Wells, 2007). Collar & Robson (2007) mention only “insects” as its food.

To a suggestion that the insect may be a beetle, Prof Cheong Loong Fah wrote: “I am not sure; I am more inclined to think that it is a hopper, because the antenna is not visible, and also the shape of the wing in the …picture (in that there is a bend in the interior margin to accommodate the scutellum?). 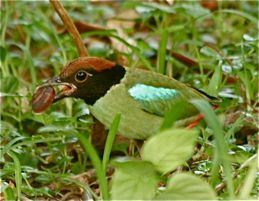 December is usually the peak migratory period for the sightings of the Hooded Pittas (Pitta... 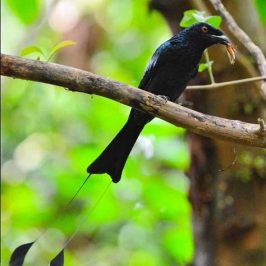