Tsen Thau Ming a.k.s t_tsen documented a family of tailorbirds in July 2008 at the Admiralty Park around Woodlands. He spent about three weeks, stalking the birds almost every morning, making use of a cameo hide and photographing with a long lens and not using flash so as not to unnecessarily stress the birds. The birds were nesting in the dense simpoh (Dillenia suffruticosa) undergrowth, using a large leaf to stitch together a pouch, inside which they constructed their nest (below left).

During the early nesting period, before the eggs were laid, the female had to look for her own food (*above left). She would leave the nest regularly and return with food to be consumed in the nest. There was no courtship feeding by the male (above right). She would remain in the nest for up to an hour before leaving to look for her next meal. The male would occasionally arrive to inspect the nest and to remove the wastes after the female leaves. The egg was laid sometime before 24th July when a chick was spotted being fed by both the adults every 15 to 20 minutes. Food included worms, caterpillars, grasshoppers, bees, spiders and once, a piece of leaf. During the three and a half weeks of observation, only once did both parents come back at the same time with food for the chick. Then a very strange thing happened. After the male had fed the chick the female fed it. Then both hopped onto the perch and locked bills, as if fighting, tumbling to the ground still in a bill tussle. Both birds then flew off in separate directions.

“When I returned on 28th July, the chick had fledged (above right) and was not present in the nest. However, I did see the male returning to the nest vicinity at 0945 hours. The female and fledgling were not seen in the area and I can conclude that they had left the area.”

On 31st July, the female tailorbird and the juvenile were spotted some 50m away from nest site. As Thau Ming recounted: “I was drawn to the area by the chick calling, still the same call as when in the nest. i concluded that it was the same female tailorbird with the juvenile, also a female. The chick was tagging around mummy for food, once in a wihle trying to catch its own.

“I spent 20 minutes with them before I left that area. Their feeding ground is now in the mangrove area of the Admiralty Park. The nesting area is 2 ft from the ground and in the thick of the simpoh ayer forest. Chick tail feathers are still short and rusty cap color not in full color.”

*UPDATE:
R Subaraj has written in “comment” that the above is a nesting study of Dark-necked Tailorbird (Orthotomus atrogularis), both sexes of which are shown in the bottom image. However, the top left image is that of a male Common Tailorbird (Orthotomus sutorius). As all images were taken at the same site, Ong Kiem Sian pointed out that there were probably two nesting tailorbirds, Common and Dark-necked. Apologies for the mix up and thanks for the corrections. 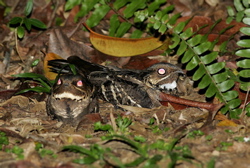