This is another documentation of the Stork-billed Kingfisher (Halcyon capensis) catching a young Common Tilapia (Oreochromis mossambicus) by Kennie Pan. This fish is not native to the region but introduced for food. This is probably the most successful and widely distributed of the tilapias.

The kingfisher was successful in catching this fish after three tries, diving at intervals of five to 20 minutes. The bird is often around Symphony Lake at the Singapore Botanic Gardens. Sometimes it flies off after a few unsuccessful dives, to return in the evening or the next day.

As Kennie wrote, “I realised that the Stork-billed is a ferocious predator when, instead of picking up the fish from the water by scooping it into it’s beak, it just dived-bombed directly at it’s target. It flapped its wings during the initial dive, to fold them as it gains momentum just before touching the water.

“The speed was so fast that most probably the fish had little chance of escaping. Due to the powerful impact, the beak just pierced right through the fish, probably killing it instantly, though it still whacked the fish against the branch when it returned to its favourite perch. After about three minutes of whacking, it flew off with its catch. 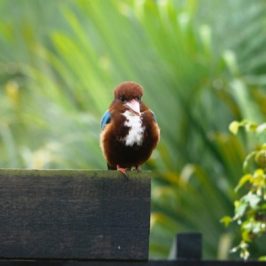