The Swift Parrot (Lathamus discolor) is found in southeastern Australia. It breeds only in Tasmania and winters in mainland Australia, mainly Victoria, New South Wales, and less commonly in SE Queensland and SE South Australia.

This is a rare, endangered parrot. Its green plumage provides excellent camouflage when it is feeding or resting in the gum tree. It is hyperactive, clambering among the branches and hanging upside down to get at the flowers. However, its loud calls betray its presence and with patience, it can be located. But when in flight the bird is very conspicuous.

Ong Tun Pin observed an individual in the Capertee Valley, about four hours drive west of Sydney, prospecting a tree hollow (top). In a two hours stakeout, the bird checked out the cavity at least five times.

This particular nest hole was supposedly used by the Red-rumped Parrot (Psephotus haematonotus). A male was also seen at the nest hollow twice but it was the Swift Parrot that showed more interest in the nest hollow.

But then we know that the Swift Parrot only breeds in Tasmania. 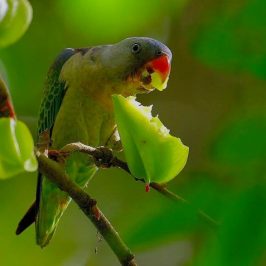 “Since the report on the well-known pair of lesbian hornbills a few years ago LINK,...