Roger Moo a.k.a. Cactus400D caught sight of this adult female Silver-eared Mesia (Mesia argentauris) feeding its noisy fledgling and recorded a series of images he is sharing with viewers here. This is a colourful bird in its black cap, silvery white ear-patch, orange yellow forehead and underparts and red wing-patch. Although colourful, it is only conspicuous when around the forest edge. Once inside the forest, it totally disappears among the canopy, except from its song.

The nest and eggs have been described but incubation and fledging periods are unknown. Up to three eggs are laid and all three chicks have been known to fledge. The bird is known to be a general feeder, taking fruits, insects and their larvae, including ants.

This babbler is a common resident in Malaysia, not seen in Singapore. 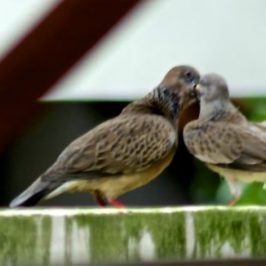 For the last three weeks or so (November-December 2014), a pair of juvenile Spotted Doves... 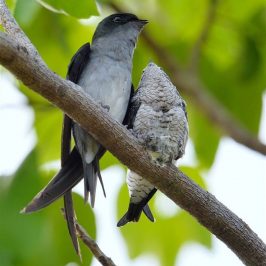 A pair of nesting Grey-rumped Treeswifts (Hemiprocne longipennis) at Bishan Park ended successfully with a...