Towards the end of June 2008, Tan Teo Seng brought me two old and used nests of the Baya Weaver (Ploceus philippinus).

I was interested in making a detailed study of these nests (left), namely the fibres and strips of leaves used and how these materials were put together. Madoc (1956) reported a total of 3,437 fine strands of grass, varying in length from 2.5 to 60 cm were used in a nest. And this was only the so-called “male” nest – the partially completed nest minus the downward pointing entrance tunnel that is usually added once the female gives her approval.

I sat down and tried to untangle the fibres, count them and measure the longer ones. For a few days I tried to do so but with partial success.

There were a total of 260 fine fibres making up the entrance tunnel. These were easily untangled as they were loosely weaved around one another and the ends never knotted (below left). The longest was 42 cm long. Untangling the outer layer of the main nest posed much problem. Many of the fine fibres ran the length of the nest, from top to bottom. The top end of these fibres invariably originated around the nest attachment – firmly twisted round and round as well as knotted to a twig or twigs. The other end was simply knotted around other fibres at the lower part of the nest. Along the way, there were a few entanglements as other fibres were twisted round it. Others fibres ran down the nest, to turn sideways or upwards, twisting round others in the process (above right). Many of the fine fibres ran round the nest, breaking up into two halves way down, each end again knotted, while along the way it may be twined around other fibres and narrow leaf pieces. These fibres were relatively strong and rough along the edge, having come from the edge of grass leaves.

The inner materials were mostly narrow grass strips, placed along the length of the nest and not knotted. However, they were loosely tied together here and there. These leaf pieces were mostly dried and brittle, breaking off easily. Because of the irregular knotting and brittleness of the materials, an accurate count was not possible. I stopped counting after 500, covering only the surface of the nest, not counting the 260 fibres from the tunnel.

The inner nest chamber was lined with feathers, below which was a layer of floss from lalang grass (Imperate cylindrical) fruits (left top). A close examination of these feathers showed a total of 26 downs, semiplumes and retrices (left bottom). In nests that were earlier examined, feathers were never found. 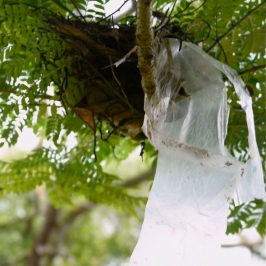 “A few years after Yellow-vented Bulbuls (Pycnonotus goiavier) incorporated tissue-paper into their nest in my... 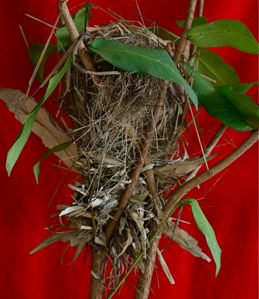 Tan Teo Seng brought me an abandoned bird nest from his fruit farm in Kota...