Being nest parasites, these birds lay their eggs in the nests of host birds. Thus they never raise their own young but rely entirely on other host species to do all the work of nest building, incubation and chick rearing.

We are most familiar with the Asian Koel (Eudynamys scolopacea) parasitising on the nest of House Crow (Corvus splendens) (1, 2, 3, 4).

We have now obtained permission from Ong Kiem Sian to show her rare images of the Common Iora (Aegithina tiphia) rearing a Banded Bay Cuckoo (Cacomanits sonneratii) (left). In Sri Lanka the host is reported to be Scarlet Minivet (Pericrocotus flammeus). The nestling of this cuckoo is known to evict the eggs and chicks of the host.

Also from Sian, we have images of a male Black-and-yellow Broadbill (Eurylaimus ochromalus) feeding a juvenile Indian Cuckoo (Cuculus micropterus) taken in a Malaysian forest (right). However, the hosts of this Indian Cuckoo varies: in India they are drongos; in China it is Black Drongo (Dicrurus macrocerus) and Azure-winged Magpie (Cyanopica cyanea); in Russia it is Brown Shrike (Lanius cristatus); in Java it is Greater Racket-tailed Drongo (Dicrurus paradisus). In both the above cases, the hosts are distinctly smaller than the cuckoo fledglings. This means that both the Common Iora and the Black-and-yellow Broadbill have to work extra hard to feed larger cuckoo chicks.

Input by Morten Strange, images from the book “A Passion for Birds” courtesy of Ong Kiem Sian. 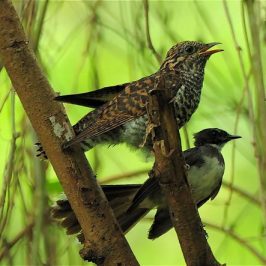 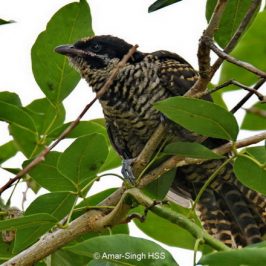