Most Australian birders would know that Noisy Miners (Manorina melanocephala) are territorial and extremely aggressive. They would not hesitate to attack larger birds that invade their territory.

Compared to the dove, which is about 15-20 cm long, the miner is larger at 25-29 cm. In the above case a small group of miners were attacking the smaller dove. The aggressiveness of the miner is further shown when Dr Lee documented a lone Noisy Miner persistently harassing a single but much larger Pied Currawong (Strepera graculina) (above). The latter eventually flew off with the miner chasing it (below). At 44-48 cm long, this currawong is nearly twice the size of the miner. The Pied Currawong is an omnivorous scavenger. Looking like a crow because of its black plumage and thick, heavy and black bill, it is in fact closely allied to butcherbirds and Australian Magpie (Gymnorhina tibicen). It prefers forests and woodlands but has become adapted to urban areas, especially during winter. 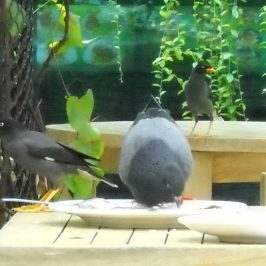