In the Pahang town of Raub in Peninsula Malaysia, Dr. Redzlan Abdul Rahman had a late night and woke up on 1st May 2008 (May Day holiday) to find a party going on in front of his house. The night before was raining and swarms of winged termites gathered around the street lamps, attracted by the light. By morning most of the winged termites were on the ground below, crawling about and with wings discarded. These termites would have attracted numerous birds the evening before. Anyway the feasting continued in the morning, attracting numerous birds that came to partake in this unexpected feast. The image above shows a juvenile Eurasian Tree Sparrow (Passer montanus) feasting on the termites on the ground. The termite near the bill of the sparrow has yet to discard its wings. “I didn’t see the Yellow-vented Bulbul (Pycnonotus goiavier) joining the foray. And this is the first time that I see Asian Glossy feeding on the ground.

“And a Juvenile Green Crested Lizard (Bronchocela cristatella) was also there (above).

“…Common Iora (Aegithina tiphia) (below left) and White-throated Kingfisher (Halcyon smyrnensis) (below right) just flew over the street and caught the termites, and than swallowed them at the perch.” This was a typical termite hatch, a phenomenon when the secondary reproductives of a termite colony are forced out, resulting in a nuptial flight. The event starts with workers making openings in the nest and forcing out the winged individuals. These individuals then take flight in a swarm, attracted by bright lights. Soon, many of these swarming termites land on the ground and discard their wings. Only a small percentage survive to eventually mate and form new colonies. 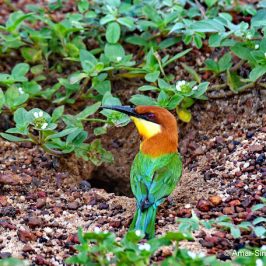 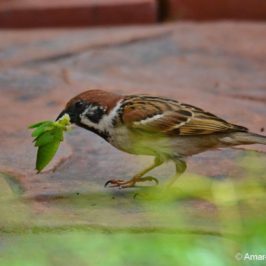