An adult male Tiger Shrike (Lanius tigrinus) in breeding plumage was photographed in Malaysia by Adrian Lim a.k.a. wmw998 and posted in the NaturePixels.org forum.

It was the morning of April 2008 when the Tiger Shrike caught a large cicada, specifically the Large Bird Cicada (Dundubia somraja) (above). This cicada is green with transparent wings.

The bird is a passage migrant and winter visitor in both Malaysia and Singapore. It hunts from a perch and takes large insects like scarab beetle, carpenter bee, grasshopper and also lizard. The cicada would be a new food record. The captured cicada was brought back to the perch. With one powerful bite, the head was torn off and swallowed (above left). The remaining portion of the insect disappeared after a few more bites (above right).

According to Wells (2007), the prey “is dismembered while being held down under a foot…” However, all the above images show the shrike using its left claws to grasp the cicada. If you look closely at the cicada, there are three claws on it, two above and one below. The fourth claw is not visible. There are two interpretations.

One is that, the hallux, the backward pointing first toe, gripped the cicada from below and the three forward pointing other toes gripped it from above, only two of these three being visible in the images. The other interpretation is that the middle of the three forward-pointing toes has pierced the body of the cicada and the claw seen on the lower part of the insect is that portion that has pierced through. This would mean that the hallux was attached to the perch and the bird was gripping the cicada between its upper three toes and the surface of the perch.

However, if you examine the second and third of the above images, you can see a faint trace of the toe that is part of the claw jutting from below the cicada. This in turn would mean that the hallux was holding on to the insect and that bird was resting its left tarsus (that portion of the foot between the heel and the toes) on the perch. 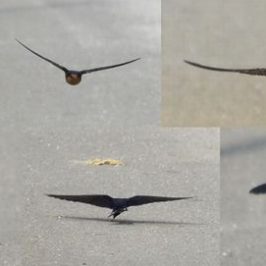 “We often see our resident Pacific Swallows (Hirundo tahitica javanica) sitting on a perch and...