The bird obviously caught the cockroach by the head, holding it firmly in its bill. It then tossed the insect into the air to swallow it head-first. As soon as it swallowed the insect, it spitted it out. Obviously there must be something unpleasant with the cockroach to force the drongo spit it out.

Prof Cheong Loong Fah confirmed the identification of the cockroach and added that some cockroaches are known to have chemical defenses.

Yes, certain cockroaches possess repellent chemicals that are foul-smelling, bad tasting, simply irritating or even have the ability to cause pain. Such chemicals are also known to be produced by some termites, earwigs, stick insects and beetles.

If this particular cockroach is inedible because of some reason or other, it is to be expected that this drongo would have learnt its lesson and avoid such cockroaches in future. Birds learn fast to avoid distasteful or inedible foods.

Drongos are insectivorous, feeding on beetles, large ants, termites, green bees, caterpillars, stick insects, grasshoppers, dragonflies and cicadas. The bird hunts by sallying from a lookout perch, to return to the same perch to eat its prey. 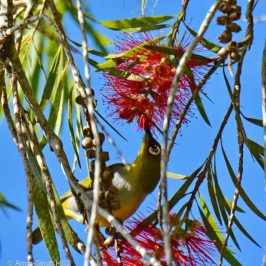