The pair of Malayan Whistling Trush (Myophonus robinsoni) that nests in a factory warehouse in Cameron Highlands, Peninsular Malaysia has been under 24 hour observation ever since Allan Teo set up an internet video camera using infrared lighting.

As mentioned in an earlier post, the sexes can only distinguished by size, the female a little smaller. As such, it is not possible to establish the sexes from observations of the video. The first feeding takes place around dawn or before when the brooding adult leaves the nest in search of food. It returns within half an hour or so to feed the chicks, making a few returns until the chicks are satisfied (above).

Then throughout the day, one or the other adult visits the nest with food for the nestlings. Feeding may take every 10-30 minutes or longer. As posted earlier, the food brought includes small snakes and moths. Visits are noisy affairs. The moment an adult approaches the nest, the two chicks get visibly excited, calling loudly and gaping widely. It can only feed one chick at a time and so returns soon enough to feed the other. Sometimes the adult remains in the nest for few minutes before flying off. In the above right image, although an adult is in the nest with the two chicks, one of the chick is gaping and begging for food – probably the other adult is nearby.

We know that there are two adults involved in feeding. As times, the adult in the nest only leaves when the other arrives. In a particular case, an adult arrived to pass on food to the one in the nest to feed the chicks.

The night temperature inside the warehouse is 16-17 Degrees Celsius. Obviously it is much colder outside because of the windchill factor as recorded by the weather station set up there. 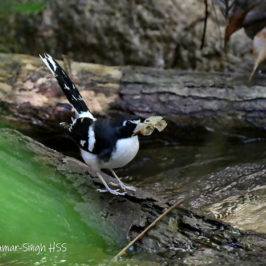 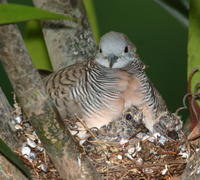