This series has been published as: Teo, Allan & Y. C. Wee, 2009. Observations at a nest of Malayan Whistling Thrush Myophonus robinsoni in the Cameron Highlands, Malaysa. BirdingASIA 11: 95-97. Allan Teo visited Cameron Highlands, Malaysia on March 2008 and sent in this report on the 24th: “Over the weekend I photographed this rare Malayan Whistling Thrush (Myophonus robinsoni) and its two chicks (above). It makes its nest at the same time very year. This species is listed as Vulnerable and is very difficult to obtain a photo let alone nesting.”

This thrush is endemic to Peninsular Malaysia. It is a rare and internationally vulnerable species and is confined to the Main Range from Cameron Highlands south to Genting Highlands.

The habitat of this thrush is the understorey and floor of the lower and upper montane forests. It forages alone or in pairs among ground litter and around streams. Whatever information on its food has so far been speculative. A few nests have been seen, described as massive cup-shaped structiures constructed of vegetative materials attached to lianas and saplings. The eggs have been described in Wells (2007) but details of incubation, brooding, fledgling, etc. are, so far, unknown. The nesting in Cameron Highlands at an elevation of about 1,600 metres could reveal a wealth of information. The nest, built inside a factory warehouse at about 5 metres from the ground, is a massive half-cup structure made up of dried plant materials, probably narrow strips of leaves, thin stems, etc. as the outside appears an untidy mass of dangling materials. The nest sits at the T-joint of two narrow wooden beams, one running along the side of a wall and the other across to the other wall. The side of the nest is attached to the wall surface, probably with the help of mud. The presence of mud can be discerned on the nest rim and inner surface.

There are two nestlings, probably around more that a week old (two weeks?) old as their eyes are opened, juvenal feathers are mostly in place and they are active all the time. They are also relatively large, the two nearly filling the nest. The food brought by the parents include small snakes and moths (left).

Allan is planning to video the nesting on a 24-hour basis using infrared lighting.

NOTE: Thanks to Ong Tun Pin, Tan Gim Cheong, R. Subaraj and Bruce Ramsay, the distribution of the Malayan Whistling Thrush has been corrected. The bird is actually endemic to Peninsular Malaysia and does not occur in Sumatra. [4th April] 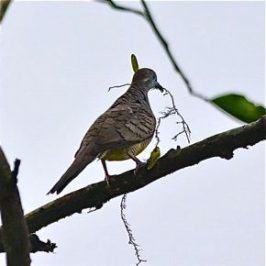