The posting of the Javan Myna (Acridotheres javanicus) chick attracted the attention of Gloria Seow. She had just picked up a myna chick displaced from its nest and contacted me. I reluctantly accepted it after the tragic end to the earlier one.

On the evening of 18th March 2007, the chick was delivered. This time around, I got a proper cage, after being made painfully aware of the dangers posed by neighbouring cats. This was a right decision as on the evening it was transferred to the cage, I found the same cat that took my earlier myna sitting patiently below, thinking of its dinner (left).

The current myna chick is a few days to fledging. The wing feathers are all fully developed. So are the tail feathers. The yellow oral flanges are turning whitish. It has also been exercising its wings. The bird can stand and hop around. In fact it did run away when I placed it on the ground.

It is well aware of the calls of the birds around, even those of the Yellow-vented Bulbul (Pycnonotus goiavier). It listens intently and at times even scrambling around the cage excitedly.

However, it still needs to be hand-fed. Only then will it gape widely for food to be introduced into the mouth. Initially this was accompanied with high pitch screeching but not so now. It appears to recognise me and is more relaxed, allowing me to remove it from the cage for feeding. This is unlike the earlier chick that willingly gaped for feeding.

And unlike the other chick, this one does not beg for food when hungry. It remains quiet most of the time, except in the beginning when it panicked when approached. Another difference is that it has no confident perching on a branch, unlike its younger counterpart.

Although about to fledge, it still needs to be hand-fed. It has yet to learn how to pick up food to feed itself. Without this skill, it will be difficult to survive when released.

Now how do I teach it to handle its own food? 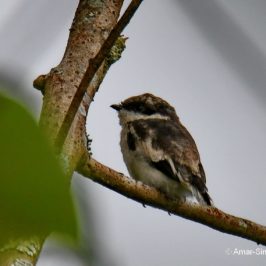 “I saw a pair of Bar-winged Flycatcher-shrikes (Hemipus picatus intermedius) with two juveniles. “There was... 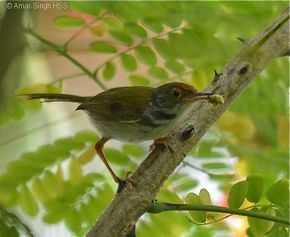