March is a busy month for the Yellow-vented Bulbuls (Pycnonotus goiavier). This is a time when their chicks fledge and the garden is filled with the never-ending chick-chick-chick of the hungry fledglings. They are constantly begging for food. And they need to be fed, come sunshine or rain (above).

The parent birds are always around their hungry chicks. When one flies off to forage, the other is always nearby. The fledglings have yet to be wary of humans and they remain on the branch, not flying away when approached. But one thing they know to do, and that is to stop their begging cries.

My being around the fledglings always makes the parents nervous. They fly around me making their loud calls, desperately trying to distract me.

They have a rich repertoire of scolds, from the gurgling chok-chok-chok or chok-chok-chok-chick to kritek-kritek-kritek, or with a kroor added after the third kritek. At times the scolding includes kritek-tik-tik. If only I know what they are saying! It has been raining these few days in the afternoons. The chicks are huddling together under shade of the leafy terap tree (Artocarpus odoratissimus). Their feathers are fluffed in an effort to keep warm and they look like cute bundles of stuffed birds. The moment a parent approaches, they become active, begging loudly and gaping wide to highlight the reddish gape lined with yellow oral flanges (above).

While one chick is fed, the other waits patiently for its turn the next time around. There is much begging but no violence – the parents know exactly which one is the next in line to be fed. The garden is full of ripening fruits and they need not go far in the rain.

I was watching the feeding in the light rain at around 1700-1740 hours from a distance and just before the sky darkened further, a pair of noisy birds landed nearby and the chicks immediately moved off to another, more leafy branch. 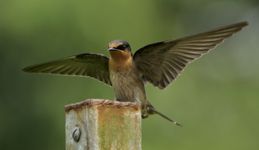 The nest of the Pacific Swallow (Hirundo tahitica) is a half-cup of mud lined with... 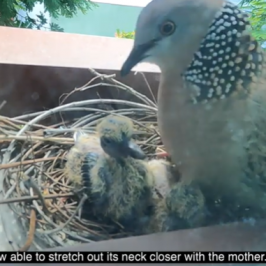 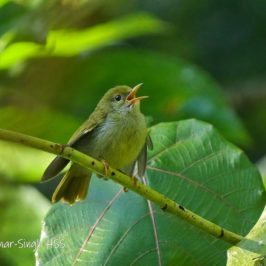 Regarding the parental role of the male Plain Sunbird Anthreptes simplex, Wells (2007) notes...