All the way from northern India, near to the foothills of the Himalayas, specifically Dehradun in Uttarakhand, comes a contribution from a young birder on the nesting of a fantail. “A fantail-flycatcher pair has made its nest in the bamboo plants just  opposite my house. It started building its nest on 28th February 2008 but as the nest is quite high in the tree and  it is in private land, thus not possible for me to monitor the nest.

“On 12th March, the bird entered my backyard and perched on the  wired fence. It was making graceful sallies after the flies and  waltzing and pirouetting in the air, also looping-the-loop in the  air.

“It returned to the fence each time it caught a fly.

“I was about 4-5 feet from the bird. But it did not  seem to be perturbed by my presence. This could be because the chicks might be needing food in the nearby nest and in order to feed them, it had no choice but to catch flies, no matter if I was around.

“It flew back to the nest after every successful catch. It was a magnificent sight to see a bird  looping in the air just in front of my eyes.”

Harshit further added, “Last year this bird made its nest in my house. So I have its nest photos with three eggs and also of the bird sitting on the nest (left).”

It seems that the bird is a White-throated Fantail (Rhipidura albicollis). 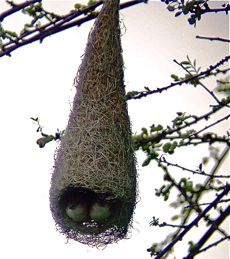