It was a male Crimson Sunbird (Aethopyga siparaja) and it was moving about the branches in a highly restless manner and calling loudly all the time (above left). I thought it was gleaning insects until I noticed another sunbird moving nearby. The other bird was also a male, but an Olive-backed Sunbird (Cinnyris jugularis). It was following the Crimson, but silently (above right).

The Crimson came into view, perching on a branch nearby, calling all the time. The Olive-backed flew and landed nearby, less than half a metre away. It then flew off, fanned its tail and landed some distance away.

The Crimson noisily followed and so the pair moved to a palm nearby. All the while the Crimson was calling and the Olive-backed was silent. And they moved around for some time before disappearing.

What were they doing? A confrontation between the two male sunbirds of different species?

“Attached are cropped images showing the head of a male Brown-throated Sunbird (Anthreptes malacensis) that... 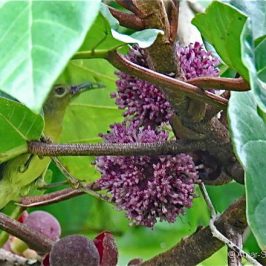