Four species of spiderhunters are recorded for Singapore, of which Grey-breasted (Arachnothera affinis) and Spectacled (A. flavigaster) are now extinct. Thick-billed (A. crassirostris) and Yellow-eared (A. chrysogenys) are rare residents while Little (A. longirostra) is a common resident.

The spiderhunters build their nests on the undersurface of large leaves such as banana, ginger and aroids. The trough-shaped nest is anchored to the leaf with the help of plant fibres and cobwebs passed through many holes punctured through the leaf blade. Wells (2007) has described the nests of most species.

Ong Kiem Sian has documented the nest of the Long-billed and Spectacled Spiderhunters in her book, A Passion for Birds. A Long-billed was photographer in the forest of Taman Negara, Malaysia, constructing its nest on the underside of a large banana leaf (above). The nesting materials of mainly dried plant materials are attached to the leaf through a number of holes on either side of the midrib with threads from spiders’ web. The web materials are teased into flattened blobs on the upperside of the lead as anchors.

Wells (2007) reports 76-84 holes spaced 2-3 cm apart on a banana leaf where a nest was attached. The actual nest is described as “a wide trough aligned along and below the support midrib, open at the drooping end of the leaf and closed off as a bulbous cup at the upper end…”

The arriving adults fly below the leaf and enters directly into the tunnel entrance. The nest of the Spectacled Spiderhunter was taken at Panti Forest Reserve, Johor, Malaysia (above). It is a compact, thick-walled, basket-shaped nest made up of plant fibres. The nest is attached to the undersurface of a large, palmately lobed leaf with the aid of spiders’ web and/or plant fibres.

Images from the book “A Passion for Birds” courtesy of Ong Kiem Sian. 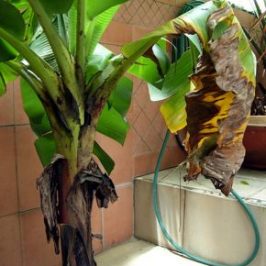 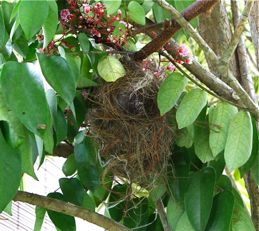 I was trimming my starfruit tree (Averrhoa carambola) to remove the branches that were infringing...

Adrian Lim a.k.a. wmw998 located and photographed a well camouflaged nest of a Rufescent Prinia... 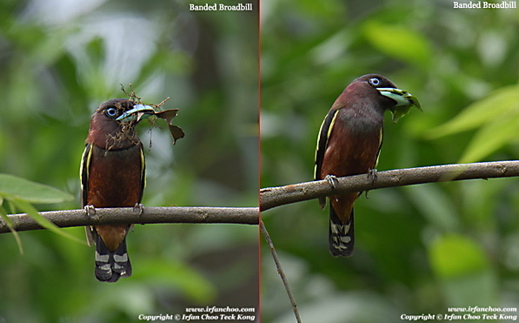 The Banded Broadbill (Eurylaimus javanicus) is a colourful bird that was once a rare resident...