On 21st February 2008, Lin Yangchen offered me a Javan Myna (Acridotheres javanicus) nestling that a colleague of his picked up near their office. This is my second nestling, the first was a Little Heron (Butorides striatus) that I looked after until it was ready for release. Apparently the nestling must have been kicked out of the nest by its sibling, a common occurrence (above). Hatched naked and blind, as with all altrical young, the eyes of this nestling when picked up were open and wing feathers developing. So it cannot be newly hatched or even a few days old. Maybe a week or more? The bird is covered with mostly black feathers, with patches of white feathers on the wings. However, when the wings are extended, the naked body becomes obvious, the pinkish skin showing prominently (left). There are no natal downs. All along the back is a narrow strip of black juvenal feathers. Along each side of the body is a similar strip of feathers.

There is a short tail, the developing feathers are only half emerged from their sheaths, the outer of which have white vanes and the rest black and white. On the rump, immediately in front of the tail is a yellow growth, the preen gland, also known as the uropygial gland (above). This secretes oil that the bird spreads over its feathers during preening, to prevent them from becoming brittle and probably to inhibit the growths of harmful microorganisms like fungi and lice. This gland is prominent in the half-naked chick and usually not at all obvious when all the feathers are in place. The wing feathers are similarly incompletely free from their sheaths, about slightly less than half their lengths have emerged (left). The primaries and secondaries are all black. The primary coverts are white.

The light orange oral flanges are conspicuous. These are the temporary enlargements of the base of the bill, targets for the adults feeding the chick.

Immediately below the tail can be seen the cloacal opening, the vent, ringed with emerging pin feathers. The cloaca receives faeces from the large intestine, urine from the kidneys and eggs or sperms from the gonads. And it is though the vent that wastes are excreted. The legs appear fully developed, with well-formed toes that come complete with claws. However, they are not strong enough to support the body. Thus the chick cannot stand upright but uses its heels and rump for support to sit upright (left). It moves with the heel and tarsus (that portion of the foot between the heel and the toes) flat on the ground.

The chick was not moving much and not making any sound at all. It weighed about 40 grams. But it did respond, opening its gape slightly, to offer of drops of water and even pieces of bread soaked in water. It even made soft chirps, indicating that all is well. 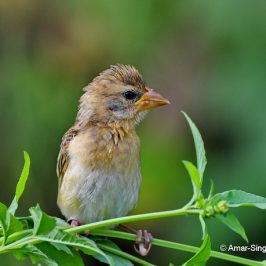 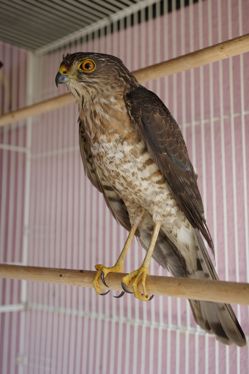 The head, upper side and upper breast of the adult male Oriental Magpie Robin (Copsychus...