On the afternoon of 15th February 2008, Dr Leong Tzi Ming was taking a casual stroll along the Telok Kurau Canal near his home when he spotted a heron foraging in the shallow water of the canal.

Tzi Ming is familiar with Little Heron (Butorides striatus), Black-crowned Night Heron (Nycticorax nycticorax) and Little Egret (Egretta garzetta), but not this bird. His suspected it to be a Pacific Reef Egret (Egretta sacra).

According to our bird specialist R Subaraj, “This is indeed a dark-phase Pacific Reef Egret. I have seen him flying over East Coast Road by your canal a couple of times over the past month.”

These birds are usually seen singly or in pairs. And most pairs Subaraj saw consisted of a dark and a white morph.

The Pacific Reef Egret is an uncommon resident. Its typical habitats are rocky shores, exposed reef flats and sometimes along sandy shore and low-tide mud around mangroves. But in urbanised Singapore, our concretised canals are becoming feeding grounds for this as well as other herons like Grey, Night and Striated. 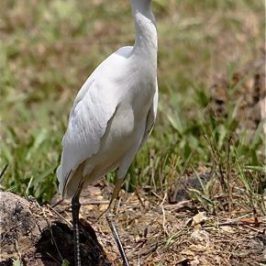