On 12th April 2007, Jeremy Lee wrote: “There is a pair of Spotted Doves (Streptopelia chinensis) just outside my window. They are nesting on a palm tree.

“The only problem is that I have never seen the pair together at all except during the nest building phase when one was bringing back some nesting materials for the other.

“Ever since then, it was always just one bird. Even at night. I searched the neighbouring trees for the other bird but to no avail. I remember as a kid we had a pair nesting on our mango tree (Mangifera indica) also outside my window. I clearly remember seeing two parents around. “Initially I had suspected the worst… that one of the birds had been trapped by poachers. There is a former construction site next to my condo. The birds feed there and there are always people there trapping these birds.

“A couple of days ago I saw two eggs and now there’s even chicks in the nest. My maid swears that there are two different birds sitting on the eggs. I can hardly tell the difference between the male and female as the difference in the brown coloration on the chest is not distinctly different.

“I will be continuing to take pictures of the birds. Can’s miss an opportunity like this one and at the same time invlove the kids in this little episode.”

Then on 20th September 2007, Jeremy again wrote: “This is the second time a pair pair of Spotted Doves has tried to raise a clutch here. The first time round, two chicks successfully fledged from the nest about two months ago.

“This time round I cannot confirm if it is the same pair, but they built a new nest about 45 degrees counter clockwise from the previous position.

“Yesterday morning, I noticed three House Crows (Corvus splendens) attacking the nest. I rushed to my toilet and fired three cups of water at the nest to drive off one of the crows that was already perched right beside the nest and harassing the bird that was sitting on the eggs. I spent the next 10 minutes making my presence felt and opened all my windows and stared at the crows until every one of them left.

“The birds are still sitting on the eggs. I am just keeping my fingers crossed that the crows do not come back… or they might come back when there are chicks… which are probably harder to conceal than eggs.”

The final report came on 6th October: “The pair of Spotted Dove chicks are almost ready to leave the nest. This will make it the second successful batch on this relatively new palm tree in the condo. It seems that the doves are giving this particular species of palm tree their vote of confidence and many of the other palm trees are also being taken up by other pairs of doves.

“Not sure about the name of this palm tree but it is definitely not local. Looks a lot like the date palms of the middle east. Grows tall and fast. with some very wicked looking spines at the base of each frond. The spines give a lot of support to the rather flimsy nests of the doves.

“Back to the earlier account about some marauding crows attacking the nest some weeks back. The crows never made a second visit. Every time I wake up in the morning, I would check the nest. Sometimes when I come back from overseas trips, I half expect the nest to be empty.

“But today, the two young birds are already walking about a foot away from the nest on the fronds awaiting their first flight.

“Either I gave a strong message to the crows on the day they tried to get at the eggs… or they may be smarter and feel that they are better off combing another area with a better hit rate, then go all the way back to some area they had previously searched. What they can take would already have been taken the first time round. Probably better to visit again in a few weeks where new birds have laid eggs.”

The plant is an ornamental date palm (Phoenix sp.). 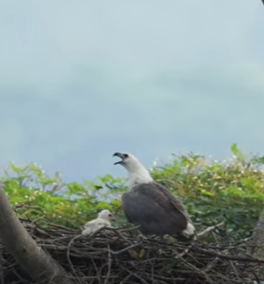 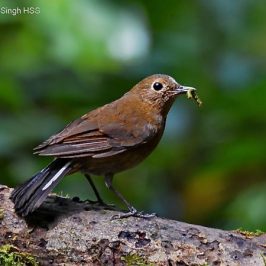 “I was exploring a new trail today at this hill station and came across a...