The Olive-backed Sunbird (Cinnyris jugularis) that was hard at work collecting fibres for weeks from a piece of fabric in front of my house was actually building a nest in the garden of my front neighbour. I did suspect that the bird was building her nest there as she would fly immediately into the compound after collecting a few strands of fibres. But I paid scant attention as these nests are common in urban and suburban gardens, even in the small balcony gardens of high-rise condominiums.

Imagine my surprise and dismay when my neighbour Sheng Lau mentioned to me on 9th February 2008 that the nest was totally destroyed a few days back.

Apparently, five Long-tailed macaque (Macaca fascicularis) descended onto the scene one day and one of the macaques simply ripped the nest from the branch and threw it away. There were two eggs in the nest but it has not been established whether the eggs were eaten by the macaque. Another failed nesting by a pair of Olive-backed Sunbirds. Failure due to various causes is common (1, 2, 3, 4) . But all is not lost.

I was surprised to see the female bird hard at work continuing collecting fibres from the same tree in front of my house (left). This time she did not fly directly into my front neighbour’s compound. Instead, she flew into the next house, obviously to restart building her nest elsewhere, hopefully in a safer environment. Does this mean that she will be laying more eggs once the nest is rebuilt?

The image above shows a male Crimson Sunbird (Aethopyga siparaja), its head and mantle not... 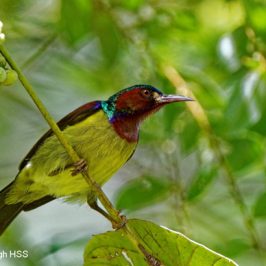