This is exactly the situation with the controversy on the existence of the Himalayan Swiftlet (Aerodramus brevirostris).

As early as the late 1980s, Richard Ollington was one birder who was totally convinced of the presence of the Himalayan in Singapore. A highly respected and well-quoted birder, he published his observations in his privately circulated Singapore Bird Reports (1992, 1993). Circulation was restricted but copies were made available to ornithologists. Chantler (1999) and Wells (1999) quoted him, with the latter recording that Himalayan Swiftlets were seen making “active passage over Singapore.”

R Subaraj, another experienced and well-respected birder, has also been convinced of the Himalayan’s presence for a long time now. However, most other birders simply ignored the controversy, as swiftles, especially Himalayan, are not all that easy to study and ID.

Ollington and Subaraj did not officially provide details of the swiftlet to the Nature Society’s Records Committee. They refused to work within the system as, according to Subaraj, “it is a lack of faith in the bird records committee” and it would be “a waste of time to submit anything.” Also, the committee was said to have adopted “highly debatable methods of acceptance and decision-making in the past that were simply unacceptable!”

So the Himalayan did not make it into the official checklist.

However, Subaraj wanted to make his point that the species was abundant and could be seen regularly, as well as to “…inspire some others to look harder at swiftlets…” So at every Bird Race he listed Himalayan Swiftlet with accompanying notes as one of his observations, even though he was sure the arbitrators would reject it. The arbitrators did reject his team’s entry at every race as the species was not in the official checklist – see Alan OwYong’s comments. So birders have always been aware of the controversy but none were willing to meet the challenge… until now. KC Tsang, at the encouragement of bird group activist Alan OwYong, went into the field and brought back crisp images of what he believes to be Himalayan. This is the first time local birders are confronted with such images of this swiftlet.

Referring to his past inclusion of the Himalayan at every bird race, Subaraj added: “This was all in vain or was it? If Alan OwYong pushed KC into photographing swiftlets, it may have something to do with this, as he was the bird race coordinator in 2006.”

KC has, on 8th January 2008, officially submitted his records to the Nature Society’s Records Committee for consideration. Faced with KC’s official submission, the Records Committee is at last forced to act. It needs to deliberate and come to a decision soon. Unfortunately, none of the committee members are familiar with the Himalayan, with the exception of Yong Ding Li, an up-and-coming young and energetic birder. Ding Li is also the editor of Singapore Avifauna (see 1).

Ding Li is one of the few birders brave enough to recently come forward in support of the Himalayan Swiftlet. He has, in fact identified the species in the field, around the fig tree at the summit of Bukit Timah and at *Panti Forest in neighbouring Johor, Malaysia.

I have been informed that members of the Records Committee are trying hard to get assistance from experts overseas based on KC’s images. Hopefully the controversy can be resolved officially one way or the other. The decision can only be: yes, no, or don’t know.

Whatever it is, the committe needs to come to an official decision, and soon! 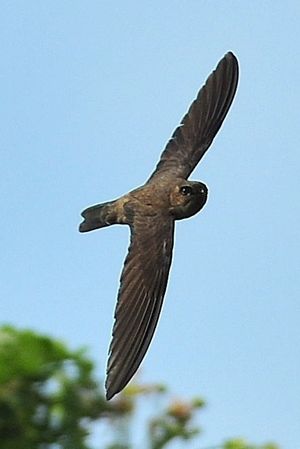 The sighting of the purported Himalayan Swiftlet (Aerodramus brevirostris) together with a clear image of...

“We have known the location of the roosting site of the Glossy Swiftlets (Collocalia esculenta)...