The sighting of the purported Himalayan Swiftlet (Aerodramus brevirostris) together with a clear image of the bird shot from below by KC Tsang as evidence, has been reported earlier (left top).

I took the liberty of sending KC’s image to Dr David R Wells, author of “The Birds of the Thai-Malay Peninsular” and he kindly sent this reply:

“Good to hear from you, and thanks for the photo. The experts may indeed be sitting on the fence, but I do have to say that identification of the Peninsula’s grey (Aerodramus) swiftlets, from a still shot, particularly one taken from below, is hit and miss. THUS FAR, no-one has come up with a way of being certain. What I will admit is that the tail-fork is deeper, more conspicuous than I would have expected in a White-nest and certainly more so than in a Black-nest – leaving HS as the best bet.

“Seen in life, flocks of swiftlets with uniformly conspicuous tail-fork (such as shown) and rather stiff wing-beat I have tended to assume were HS, and passage movements of such birds have been noted over the S end of the Peninsula, including Singapore.

“Beautiful picture, nonetheless, and one of these days it could contribute to working out something more useful by way of ID characters.”

Black-nest (A. maximus) and White-nest (A. fuciphagus) are both common residents, the latter is also known as Edible-nest.

KC managed to get an image of the bird from above some time later (left bottom) and again I sent the image to Dr Wells. His response:

“Presumably not the same individual as before as tail-fork less pronounced (or it appears so; photos can be deceptive). All I will say is that any bird with a rump this pale relative to the rest of the upperparts, as far south as Singapore, could hardly be a White-nest. Given that Black-nests have the squarest tail of the three, the odds are in favour of Himalayan. BUT, this ID is still only statistical.”

In the absence of a live or dead specimen (or possibly more than one) in hand, the above images could be considered those of the Himalayan Swiftlet – all things considered. 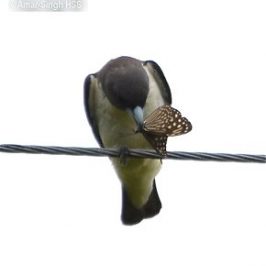 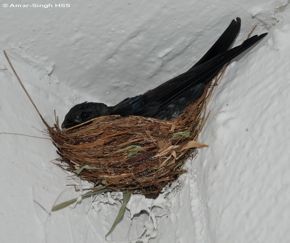