Experienced birder-cum-bird photographer KC Tsang was at a local park when he witnessed an eagle flying off with a helpless prey clutched in its talons. This in itself would be an exciting experience for any birder. But this was not all. He documented another raptor circling round and a third flying off, also with a prey tightly clutched in its talons. Three raptors in a single morning! What a morning! His account, illustrated with images, allows readers to vicariously share his exciting encounters on the morning of 31st January 2008: “This morning I was at the look-out point at Telok  Blangah Hill Park (top), looking for swiftlets to  photograph. From the corner of my eye I sighted a  raptor swooping down onto the crown of a tree. Unfortunately, I was not in position to record the snatching of the prey by this raptor.

“A minute or  so later, the raptor rose from the tree carrying  the prey, a squirrel, in it’s talons (above). The raptor was a Changeable Hawk Eagle (Spizaetus cirrhatus), adult dark  morph, while the prey was a Plantain Squirrel (Callosciurus notatus singapurensis) (below left). “Besides the Changeable Hawk Eagle in action, there was a Black Baza (Aviceda leuphotes) in flight (above right). The poor bird, having circled the hill two times and spotted nothing,  decided to fly elsewhere for its meal. “Then some time later, a Brahminy Kite (Haliastur indus) came up from  below with a prey in its clutches (above). If you are to  examine the dangling foot, it looks like that of a  White Breasted Waterhen (Amaurornis phoenicurus) (left), and not the foot of the  Kite.

“So much excitement for a morning of birding at Telok Blangah Hill Park.”

The Changeable Hawk Eagle is an uncommon resident, the Brahminy Kite a common resident and the Black Baza a common winter visitor and passage migrant. 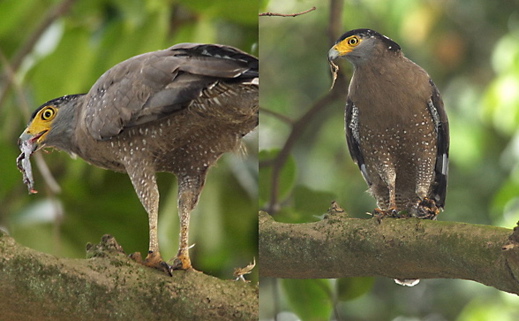 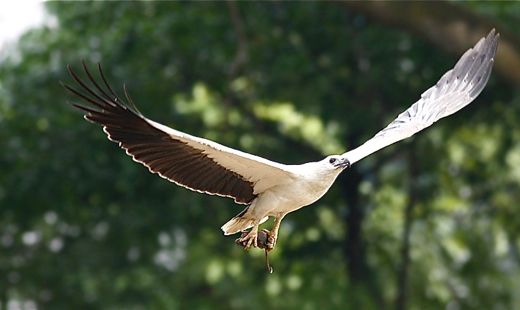 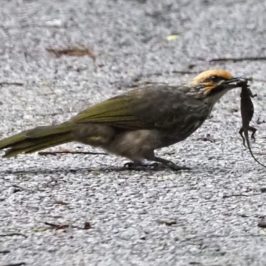