“Unbelievably, a Spotted Wood Owl (Strix seloputo) appeared at 2pm on 19th January 2008 in the most unlikely of places – on a tree just outside my 12th floor flat in Toa Payoh, a housing estate in Singapore with towering flats up to 40 stories high. However, my house happens to be located just beside a grove of shady mature trees providing thick leafy cover ideal for an owl’s daytime roost. “This grove is also the home to dozens of other birds. Over the last two years, I have recorded 31 species seen in Toa Payoh itself, from migrants like the Blue-tailed Bee-eater (Merops philippinus), Arctic Warbler (Phylloscopus borealis), Asian Brown Flycatcher (Muscicapa dauurica) and Crested (Oriental) Honey Buzzard (Pernis ptilorhyncus), to residents like the Sunda Pygmy Woodpecker (Dendrocopos moluccensis), Oriental White-eye (Zosterops palpebrosus) and Pied Triller (Lalage nigra). All these birds were seen in the trees right at my carpark. Even the concretised canals hold water birds like the Little Egret (Egretta garzetta), Striated Heron (Butorides striatus) and Collared Kingfisher (Todiramphus chloris).

“Still, the appearance of this rather rare owl was a huge surprise to me. I was alerted to its presence by the loud and persistent caws of House Crows (Corvus splendens) emanating from just outside my study’s window.

“I took a quick glance and saw a curious brownish bird which I thought at first to be a female Asian Koel (Eudynamys scolopacea) (as seen from afar), and it seemed to be at the center of the crows’ attention. Since I’m one that makes a habit of peering at birds outside my windows through my binoculars, I decided that a closer look was in order. Imagine my shock and utter delight when I realized that the Koel was actually a Spotted Wood Owl.

“However, I soon realised that my Owl was under siege. The crows were mobbing it relentlessly and mercilessly throughout my 40 minutes of observation, dancing around the poor, agitated Owl, taking turns to jab and jeer at it from all directions. The Owl in turn followed this threatening display with increasing irritation, swiveling its head all 270 degrees as it tracked the movements of these aggressive warrior crows. It also attempted to lunge back at the black menace, snapping its razor-sharp beak in turn, but no actual physical contact was made between the birds. There was a point when the Owl almost lost its balance trying to defend its perch. In the end, the crows won the battle, successfully asserting their territorial claim by chasing my beloved Owl away. The video of this avian drama has now been uploaded to youtube.

“This Spotted Wood Owl could be the same one recorded at the former Bidadari Cemetery (now transformed into a jogger’s park), which is located about 3 km away. It could also be a post-breeding dispersal juvenile trying to establish new territory. My house is near the fringe of the Central Catchment Area, with MacRitchie Reservoir, a potential owl roosting ground, being just 1.5 km away.”

All over the world, predator birds are regularly mobbed by smaller birds. Over in Singapore, owls are often mobbed, especially when seen roosting during the day: two cases involving Spotted Wood Owl (1, 2) and one with Barn Owl (Tyto alba) have earlier been posted. 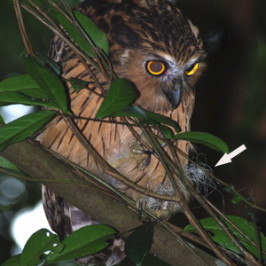