On the morning of 7th November 2007, Tan Teo Seng brought me a cutting of a creeper with a Common Tailorbird (Orthotomus sutorius) nest still attached to it. Inside were three damaged eggs. The nest was attached to a number of aerial roots of the creeper and a single leaf of the climber, an araceous plant. A single dried avocado (Persea americana) leaf was sewn to the leaf of the climber to complete the shell within which the nest was lodged (above left). Copious cobwebs were used in the construction of the nest, as shown in previous posts (1, 2). So good was the camouflage that the gardener did not notice the nest when he trimmed the plants growing along the wall of the porch.

When Teo Seng discovered the gardener’s mistake, he immediately took the nest, still attached to the plant stem and hung it back. There were three small, light bluish eggs covered with various sized chestnut blotches and speckles. The next day when he examined the nest, he found a small puncture in each of the three eggs. When he handed the nest and contents to me three days later, the openings were large and the eggs empty (left).

A few questions need answers. Did the parent birds returned and punctured the eggs, considering that the nest and eggs were disturbed? Could it be predation? In which case why were the eggs not seriously damaged? Are there any animals capable of causing a small puncture on the egg to extract the contents?

If any reader has an answer, please share with us.

An earlier failed nesting of a pair of tailorbirds was due to the parent birds not feeding the two chicks that eventually died in the nest. 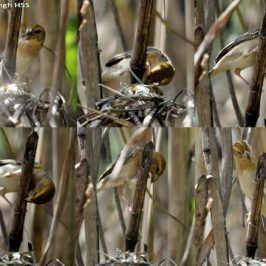