December 2007 was a time when masses of Atlas moth (Attacus atlas) larvae were seen munching through the crowns of the roadside tree, Senegal mahogany (Khaya senghalensis). Jeremy Lee reported hearing a low crunching sound as they work their way through the foliage, to totally defoliate a few trees along Loyang Way (above). There were hundreds of them and many ended on the ground below, to slowly die from lack of food. Those that remained on the trees soon turned into cocoons (left middle), hanging from the twigs like miniature roosting fruit bats, as Jeremy puts it.

Othere reported seeing the caterpillars at the Chinese Garden, Jurong and at Pulau Ubin.

The spate of wet weather may have triggered the egg laying. Whether this is so or not, December is generally the month when these caterpillars appear.

The larvae are large, growing to 7 cm long or more (left top). They make a juicy meal for any reasonably sized bird, especially when they are so conspicuous – when the tree is totally defoliated. Why then are there no reports of birds taking these juicy caterpillars – except for one lone record from Pulau Ubin of an Oriental Pied Hornbill (Anthracoceros albirostris) enjoying them?

KF Yap believes that something is definitely eating the caterpillars. He came across a batch of caterpillars happily munching away in a tree. He returned a week later to find not a single caterpillar around, not even a trace of the cocoons. 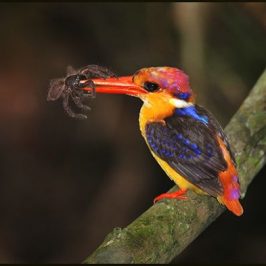 One of the favourite food of the Blue-winged Pitta (Pitta moluccensis) is earthworm. These worms... 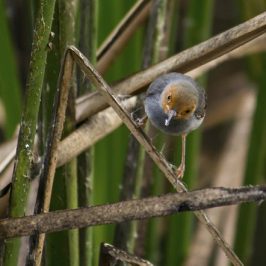