Connie Khoo SY and Lim Phaik Imm were in Bali in November 2007. While there, they made a side visit to Petulu, a small village well known for the thousands of herons arriving each evening to roost. During the day there were already more than 10,000 birds around and almost everywhere were loose feathers and faecal matters. The smell must be distinctive.

By evening the birds would arrive by the hundreds, then by the thousands. And before long all the trees in the village would turn white as the Cattle Egrets (Bubulcus ibis) settle on all available branches. The noise made by the birds can be deafening, reaching a crescendo before darkness descends when quiet returns. Connie and Phiak Imm report: “At Petula Gunung Village, approximately 5km from Ubud, we were treated to a spectacular sight of thousands of birds arriving every afternoon. By 4 pm, thousands of Cattle Egret were around, resting and flying about. And just before dusk, they arrived in the hundreds to roost. We estimated that there were about 15,000 by 6 pm, a huge number! According to our bird guide Sumardi, there are usually about 20,000 every evening. The image above (left) shows two males in their first year breeding plumage. That on the right is a female. “This rare phenomenon reminds us of Lake Temenggor when a big flock of hornbills were flying pass from upper Belum to lower Belum, heading towards the Thai border to roost for the night. What a spectacular sight!

“We re-visited the village the next evening and observed the nesting and courting behavior of these birds. It was not a problem watching them copulating because in every tree there would be one or two pairs busy mating.

“The birds were in their colourful breeding plumage. The male’s lore is deep purple and the bill is orange red (left top), whilst the female’s lore is beige or light yellowish and bill dark yellow (left bottom).

“Many of the egrets nest in the 5-8 metres, full bloomed pinkish frangiapani tree (Plumeria sp.). Some of the trees are growing close to the roof of the wooden terraced houses of the villagers. the breeding season their plumage changed from white to very dark orange and golden. They believe that every year from September to December or so, the villagers are blessed with good health and luck. They thus revere the egrets and cause them no harm. They even pray to the birds. Amidst the colony of Cattle Egrets, we also noted one Little Egret (Egretta garzetta) and one Intermediate Egrets (Egretta intermedia) (right), both in full breeding plumage.

“Birdwatchers need to take precautions least the egrets’ poo land on their head. So a hat or cap is necessary.

“The day when we were there happened to be a holy day. All the women and children except man and boys, dressed in their colourful lacy transparent “kebaya” with “batik sarong” matching and walked to the temple to provide simple home made offerings, such as sticky rice and flowers to the Hindu Gods. The offerings were neatly arranged in colourful, hand-woven straw baskets of various sizes stacked on top of their heads (below). On this holy day, they believe that the deities and ancestral spirits descend from heaven to visit earth. According to local legend, the herons appeared after one of the worst massacres of suspected communists in Indonesia. This was immediately after the downfall of Sukarno in 1965. Villagers believe that the white herons are the souls of the slaughtered Indonesians. 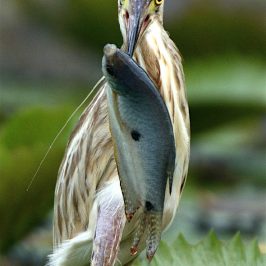 “The Yellow Bittern (Ixobrycbus sinensis) was fishing some short distance in front of me. It... 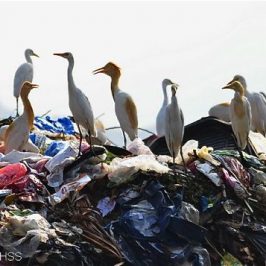