On the morning of 26th December 2007, KC Tsang documented the Peregrine Falcon (Falco peregrinus) at the Japanese Garden in Jurong (above). The bird was spotted by Margaret Yeo who alerted Amy and KC.

The Peregrine Falcon is widely distributed throughout the world. Its habitat is extremely variable, from the hot tropics to the high Arctic; from the coast to far inland; from semi-desert to forest; and from sea level to an altitude of about 4,000 metres. It breeds in all continents except Antarctica. The uncommon visitor and passage migrant that is seen locally during the winter months is the subspecies japonensis. Its arrival can be as early as the first week of August to late May.

It breeds in West Siberia to Kamchatka and migrates to North Africa, Sri Lanka, Indochina, Thailand, the Malay Peninsular and as far south as Sumatra.

Latest: Jimmy Tan sent in the image on the left on 9th January 2008 stating: “There was also another Peregrine Falcon there at around the same period which appeared to have pick up some oil stains. Notice that its claws were also stained.” 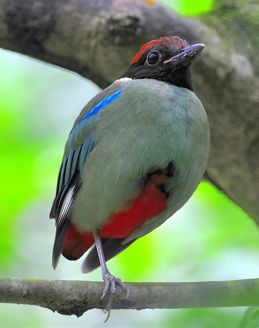 The Hooded Pitta (Pitta sordida), an uncommon winter visitor and passage migrant to Singapore, has... 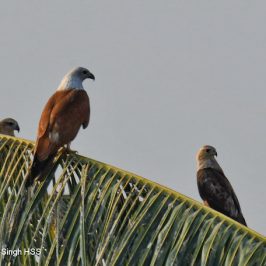