KC Tsang and Johnny Wee were at the Sungei Buloh Wetland Reserve on the morning of 15th November 2007 when they were rewarded with the sighting of an uncommon raptor at 1130 hours.

“Had a long walk with Johnny Wee this morning, and found this fellow perching up a bare branch …

Would greatly appreciate if some one can confirm the ID of this bird. The closes I can get is Chinese Sparrowhawk (Accipiter soloensis), but the eye and bill colour is wrong…”

The side shot by KC makes it less easy to identify the bird, if only the frontal is visible…

The distinct yellow-orange cere seen in the image indicates that the bird is an adult – in the juvenile it is yellow-grey to yellow.

This small accipiter is an uncommon passage migrant and winter visitor that has been regularly sighted at various locations during October–November and March. It breeds in Northern China, Korea and Taiwan. During the northern winter, it migrates south to reach Singapore, Indonesia and West New Guinea. The bird makes the return flight during March-mid May.

Ferguson-Lees & Christie (2001) reports that it migrates along two separate routes. The main route is from the Korean Peninsula south along Nansei-shoto through Taiwan and the Philippines to Sulawesi and Moluccas. The other route is from southeast China through the mainland Southeast Asia to Sumatra, Java and Bali. 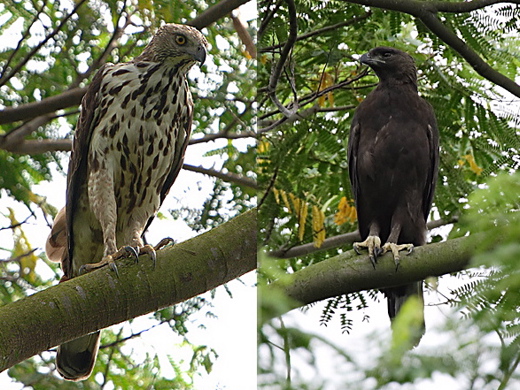 The Changeable Hawk Eagle (Spizaetus cirrhatus) found in this part of the world is the...