“Murder! Murder!” shouted Shazam, the black caterpillar, as she found herself waffled by a red, giant pair of beaks. She was carried along in a wild goose chase – by whom? She knew not.

I finally caught up with Cicero, the Short-tailed Green Magpie (Cissa thalassina). He was restless and prancing from fern fronds to branches of trees, trying to conceal his big catch and throwing cautious, side glances through his masquerading black, eye band onto a bird wave of Chestnut-capped Laughingthrushes (Garrulax mitratus) while cradling Shazam in his jaws.

“Put me down… put me down!” Shazam screamed.

Cicero was then seen swinging the poor sort dizzy as she came close to being piked onto a thorny bit of tree branch.

“Wait! Wait! I have good grub prospects for you. Hear me before you eat me for breakfast, ok?” Shazam was pleading and sweating away in anticipation of death by torture of a thousand cuts and swallowed whole.

The pirate of the cool, Bornean forest feathered in Yuletide colours decided to release his grip on Cicero onto a branch, leaving the victim dangling on the edge in a daze.

“Ouch! You sure hurt me bad….” Shazam complained looking a bit pitiful yet saucy.

“Now just what you think you are ranting about, my hairy one?” questioned Cicero. He rolled his big eyes at Shazam suspiciously, yet with a little bit of marshmallow look onto his ‘breakfast’. His brain was screaming, “I want my breakfast! I want my breakfast!”

Do you think Shazam, the witty, black caterpillar managed to talk her way out in saving herself from being eaten by Cicero, during this festive season of Christmas like the Fairy Tale story in Thousand and one Night?

Or was Cicero in not engaging the spirit of giving and forgiving, was preparing a gourmet of black caterpillar whilst looking for a high altar to sacrifice poor Shazam-a worm is just a worm?

Cicero’s encounter with Shazam was observed for half hour. They were seen an hour later. Cicero was still toying with Shazam in his beak.

The Short- tailed Green Magpie is like a cousin of the Common Green Magpie, with bold, raiding behaviours. Their large size of approximately 40 cm in length make these species intimidating to small passerines and their overall green plumages make excellent camouflages in forests of high altitudes. Attached is an image of Common Green Magpie (Cissa chinensis) for comparison (right). Is he trying to meditate himself into invisibility?

Despite their gorgeous bright- red beaks and feet, it is difficult to spot Green Magpies even at close range when they remain still unless their calls give them away. Swift in their inspections and foraging movements, hopping in middle storeys of forests and occasionally on floor, make digiscoping such birds ever so challenging. Yet…observing their rogue behaviours are never dull moments.

This article is written catering specially to include junior readers above 10years of age for which several viewing names have come into mind.

MERRY CHRISTMAS TO YOU NIGEL NG, Senior and Junior readers! 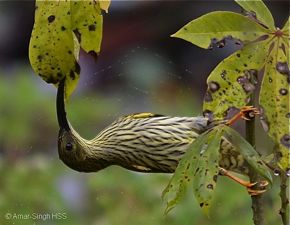